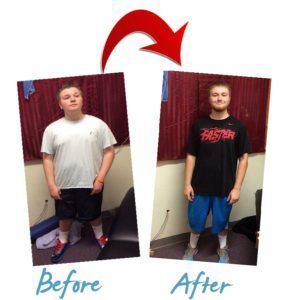 “I started with Dan as my personal trainer in Farmington February of 2014 which was the middle of my junior year of high school. At this point in my life I was seriously overweight. I weighed 225 pounds and was only 5’7”. I had a terrible hunch and even worse self-esteem. One day my mom asked me if I would be interested in having a personal trainer. She had heard about a new program Dan was offering in which he guaranteed a loss of 10 inches off your body in 10 weeks. Initially I had no interest at all but after a day or two I decided to give it a chance. So I started training with my personal trainer, Dan and after 10 weeks, sure enough I had lost 10 inches off my body. At this point I was only working out once a week. After the 10 weeks and 10 sessions were up there was a noticeable difference in me. My belly shrank, I had more energy and I was feeling good. So I decided to stick with it. This time I decided to train with with him twice a week. The whole time, my personal trainers stuck with me and consistently pushed me to limits I didn’t know I could reach. As we continued the results kept coming. Every weigh-in got better and better. I started getting compliments from people which was a great feeling. A few months later I decided to train three times a week. Time and time again I was impressed by the results at the next weigh in. My clothes were getting looser and my pants no longer fit, this time in a good way. In April of 2015 we did another weigh in. This time we took pictures and compared them to the original pictures. What a difference. My posture improved ten fold and I had a flat front. Since April I have been training with Dan Monday through Friday. We did our last weigh in on August 14, 2015 just 4 months after the April weigh in. The results speak for themselves. In just over a year and half I lost 33inches off my body. I went from a size 40 waist to a size 34. I weigh under 200 pounds and have put on significant muscle. My posture is completely fixed and I no longer hunch over. My personal trainer in Farmington, Connecticut changed my life and I know he can do the same for you. If you are ready to the next step and get the body you deserve, train with Dan.”